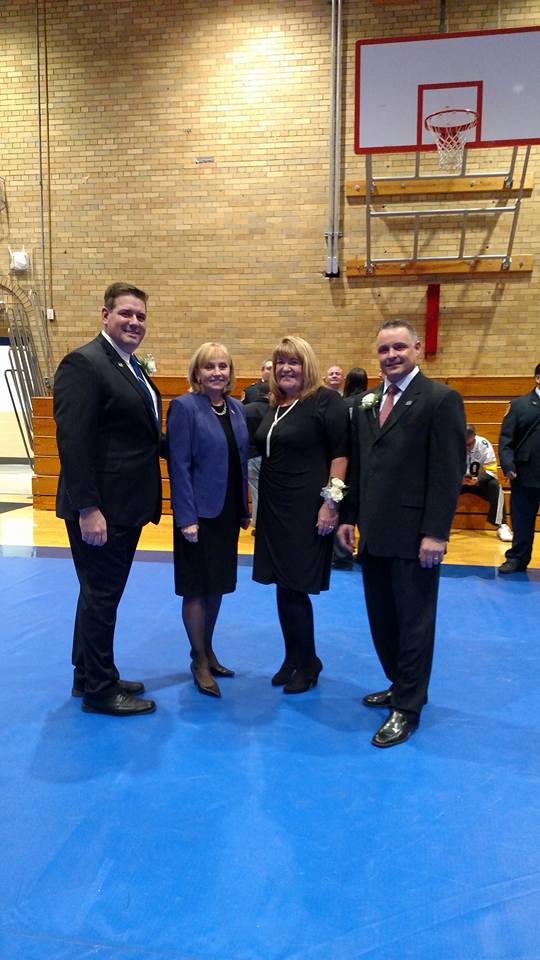 Reorganization season was in full swing over the weekend, Save Jerseyans, and in Bergen County’s southernmost town, Lieutenant Governor Kim Guadagno was on hand to swear in three new council members who completed the sweep of town government last fall.

Guadagno congratulated the new members and greeted the audience with a strong speech emphasizing the importance of good governance from every level. Speaking for the reinforced 7-0 municipal GOP majority, Mayor Joe Bianchi remarked on the successes his administration has had in one year of governance and pledged further progress for residents in 2016.

Since Republicans have taken over, FedEx has agreed to locate a new facility bringing over 200 jobs to the town and, plans were put into motion to develop the Ridge Lumber property which has sat vacant on North Arlington’s main street for nearly a decade.

Newly elected Councilman Brian Fitzhenry thanked all those who worked tirelessly on his campaign and emphasized the community effort that made today’s reorganization possible.

Full control is nothing short of a miracle in a town that remains 3-1 Democratic. Fitzhenry ended his speech by pleading with voters to demand fiscal sanity at the county level where Democrats presently dominate and remember to vote for Freeholder Maura DeNicola who was on hand.

DeNicola faces re-election this year with the harsh reality that a loss would mean an end to a Republican presence on the freeholder board.

Also in attendance was Wyckoff Mayor Kevin Rooney, the only current officially announced challenger to BCRO Chairman Bob Yudin. Rooney has been seen making the rounds at the municipal re-orgs; Yudin was noticeably absent from a town where Republicans have made no bones in expressing their opinion that Yudin failed to play a role in their electoral success.

“Yudin couldn’t find North Arlington on a map, he sends us a small check every year and expects us to kiss the rings” remarked one long-time North Arlington Republican who spoke to Save Jersey at the event.

What’s inarguable is how the electoral success in North Arlington is a model which the county should seek emulate. Next year, Councilmen Mario Karcic and Rich Hughes will face the voters and given the current win streak we should hope that nothing changes.

1 thought on “North Arlington reorganizes as Bergen Republicans look ahead”