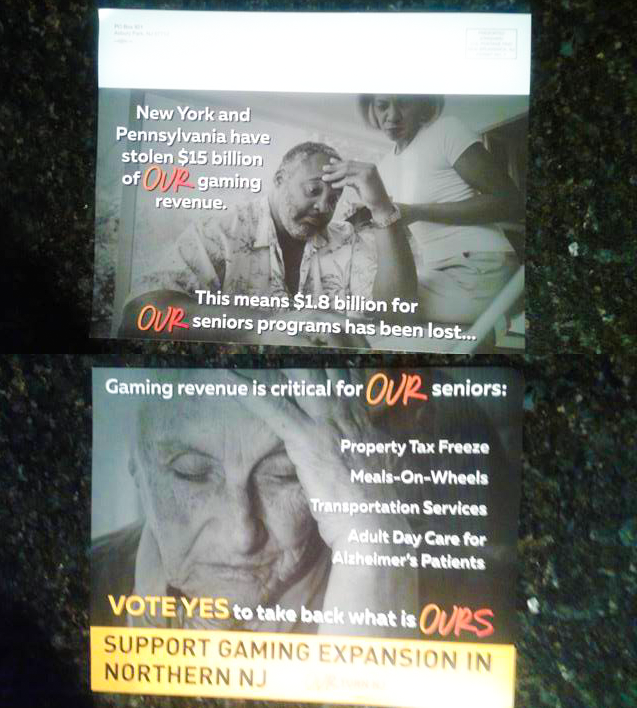 The battle over whether to authorize the construction of two North Jersey casinos is about to break wide open, Save Jerseyans, as competing factions (for and against the November ballot question) prepare to unleash millions of dollars in state-wide advertising.

On Wednesday morning, George Kneisser, founder of New Jersey Citizens for Property Tax Reform, came out swinging against casino expansion and in support of the ‘Trenton’s Bad Bet‘ campaign opposing it.

“Time and again, we have seen Trenton politicians make promises they can’t keep, while sticking taxpayers with the bill,” explained Kneisser. “New Jersey property taxes are the highest in the nation, but little has been done to ease this burden on working families.”

Opponents of expansion contend that politicians haven’t shared important details — including how the infrastructure costs associated with two new casinos would be financed — at a time when New Jersey property taxes continue to reign as America’s worst.

“Trenton should focus on the important issues, not bringing more casinos with potentially higher property taxes into the state. New Jersey voters have been left in the dark about the full impact on property taxes and increased cost of infrastructure that would be required for these casinos,” added Kneisser.

Meanwhile, ‘Our Turn NJ (a 501c4 public issue advocacy campaign) relying on the backing of leading Democrats, Republicans and Labor leaders as well as Paul Fireman and Jeff Gural, the men who want to build the new casinos, is tugging heart strings with a new mailbox campaign (see the images on the right).

Gural, it should be noted, has donated thousands to N.J. politicians in recent years including Democrat Senate President and North Jersey casino booster Steve Sweeney.

His ‘Our Turn’ campaign mailer argues that “our gaming revenue” has been captured by newer casinos in other states like Connecticut and Pennsylvania and, as a result, New Jersey state programs financed by casino tax revenues ranging from adult day care to Alzheimer’s patient funding will inevitably suffer unless something is done (e.g. erect two N.J. casinos closer to the New York border?).

Whether two North Jersey casinos would actually be able to compete with out-of-state alternatives — or simply cannibalize Atlantic City’s significant North Jersey consumer base — is at the heart of the larger debate over whether the politically-tainted referendum makes sense for the economically-fragile Garden State.

Count on an avalanche of mail, radio, TV and Internet spending to try to push you in one direction or the other in the weeks to come.