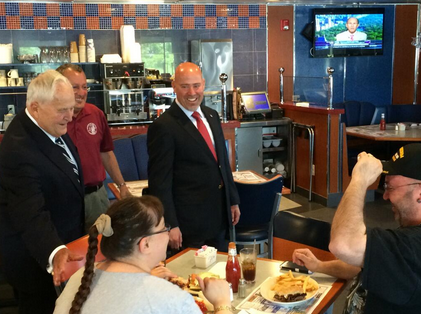 A few thoughts as the dust settles from Tuesday night:

(1) #NJSen: All other things being equal, targeting matters most…

We’re going to spend some time in the days ahead analyzing Jeff Bell‘s surprising U.S. Senate primary victory, Save Jerseyans, having defied conventional wisdom and won a plurality of the vote despite shunning the county convention circuit and carrying not a single line. Residual name recognition? Maybe a little. Benefiting from opponents’ mistakes? Sure, to a degree.

The most obvious explanation: solid targeting.

It’s all anecdotal, but I’ve heard from numerous reliable GOP primary voters living in different counties who reported hearing from only one candidate in their mailboxes and robocalls in their voice mail boxes over the past couple of weeks: Mr. Bell, a former Senate candidate and speech writer for Ronald Reagan who hasn’t resided in New Jersey for three decades prior to this instant contest but who is determined to make an issue out of monetary policy and, specifically, reviving the gold standard.

Notwithstanding institutional disadvantages (and a less-than-orthodox messaging strategy), Bell’s relatively modestly-priced targeted mail campaign apparently allowed him to win populous counties like Bergen and Morris where there wasn’t an awarded line and place a respectable second place in places like Atlantic where someone else had the line. Lucky ballot positioning didn’t hurt either, notably in Bergen where he had the first slot. And the end result: a sub-30% win in a crowded field.

The Bell strategy likely would’ve come up short in a higher-turnout model or if any of Bell’s opponents had had real resources at their disposal but they didn’t, did they?  So there you have it…

(2) #CD12: Bridgegate – or at least Chris Christie – is a winning issue among Democrats…

This one’s pretty simple. New FDU poll results released Primary Day found Governor Chris Christie rocking a weak but “stabilized” 44% job approval rating in New Jersey. Reading deeper, however, leads to the discovery that Democrats continue to slip away from the Governor. Only about one quarters of Democrats approve of his performance; over 60% have adopted the opposite opinion, representing a major reversal from one year ago in the wake of Hurricane Sandy.

Newly-minted CD12 nominee Bonnie Watson Coleman didn’t exactly anticipate this trend when she was forced to quit the SCI after baselessly and inappropriately calling for Chris Christie to resign. It worked for her all the same.

Oh, and that time that her major adversary told Mercer Democrats that they were her enemy? And then Mercer took her at her word and turned out 17,000 voters to defeat her? That also played a role (h/t Olivia Nuzzi).

It was Steve Lonegan’s race to lose, Save Jerseyans, without taking anything away from the intimidatingly dominant performance put on by GOP campaign dream team comprised of GC Chris Russell and the resurrected Frank Luna, but the former AFP-NJ chieftain and Bogota Mayor somehow managed to do lose despite himself. Or because of himself?

For starters, he never bothered to introduce himself to CD3 voters. Trumpeting his special primary win over Cory Booker in the district several months earlier served as a decent talking point for some voters but, unfortunately for Steve, it looks like his team actually believed it. An October election and a midterm primary aren’t analogous in any way as far as turnout models are concerned. He had he name recognition advantage, yes, but not a default electoral edge. Different beasts.

Steve Lonegan should’ve started the primary season with an inspiring biographical piece touching upon his family life, business background and relative success as a legally-blind activist. What did we get instead? Hyper-personal negative attacks and curiously dishonest ideological allegations. The attacks on MacArthur’s wealth were among the most bizarre I’ve ever witnessed in a Republican primary (given that GOP’ers are hardly anti-wealth). Some of the nastiness can be explained by the true lack of profound ideological differences between Lonegan and Tom MacArthur leading to the need to distinguish each other on different grounds.

It’s also the same race he always runs and, uncoincidentally, always loses. It’s a behavioral thing as much as it’s a strategy thing. Except for (1) the lack of engagement with the press this time around and (2) the populism angle (see above), both of which were distressingly new.

The “why” doesn’t matter in the final analysis. What does matter: a critical mass of the base electorate simple doesn’t like Steve for personal more than issue-based reasons. The ardent self-styled “anti-establishment” folks in his corner can rail against money, bosses, and all-manner of boogeymen until they’re all blue in the face. Until they internalize the reasons behind these failures, call off the RINO hunt and learn something from the experience, Save Jerseyans, they’re going to persist in a dangerous state of ignorance and continue to lose elections.