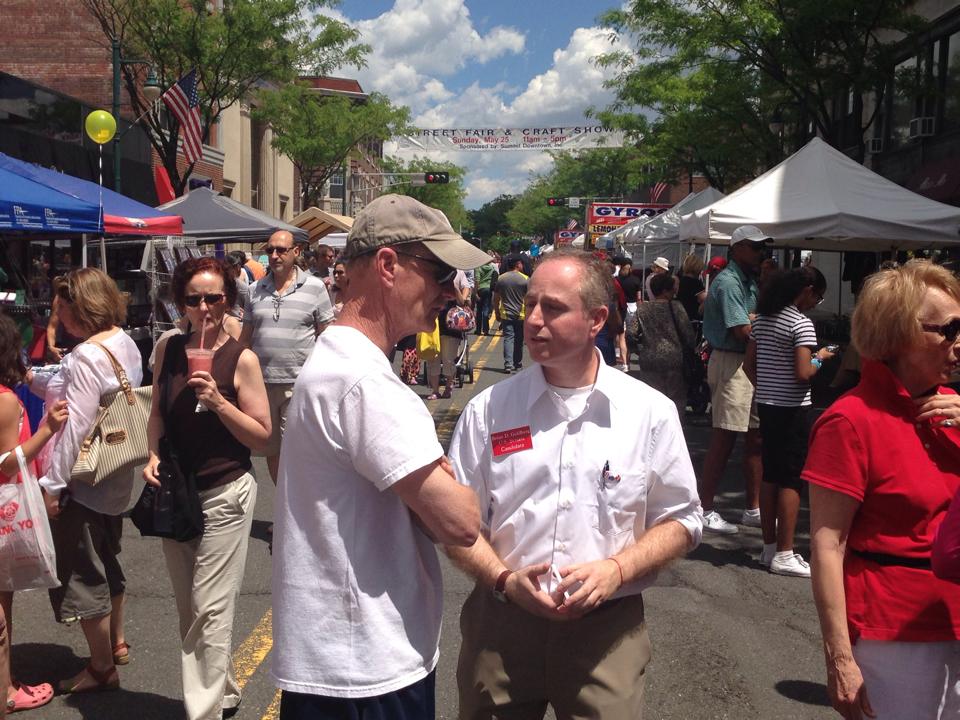 With the NJ GOP watching passively from the sidelines, Save Jerseyans, four men desirous of the chance to take on the Cory Booker (D-Twitter) media machine this November are working hard through Tuesday evening to earn that right.

Artisanal concrete businessman Brian Goldberg, who picked up the Bergen Record‘s backing on Sunday, is continuing to rely almost exclusively on web-based mediums to get his message out ahead of Primary Day in expectation that his significant county line advantage can do the rest. His online content includes short, positive web videos including this one released on Monday titled ‘Bright Future.’ Brian’s a likable guy one-on-one; will he be able to raise the dough to put together a serious campaign effort?

Middlesex-backed Professor Murray Sabrin isn’t much better-heeled though he boasts some residual statewide name recognition and has eagerly served as Goldberg’s self-appointed primary antagonist, taking shots at his opponent via social media (and traditional media); he’s doing some more traditional stuff, too, including trumpeting his endorsement from the Philadelphia Inquirer and running a radio spot. I’ll say this much: Sabrin would spend the next five months on constant offense regardless of whether (and this is a big “if”) the electorate accepts his hardcore brand of libertarianism.

Sabrin also went through the time and expense of dropping an attack mailer on conservative Rich Pezzullo in the final weekend leading up to Primary Day, presumably because Sabrin thinks Pezzullo could siphon votes from him in uncommitted counties or, more generally, win the support of voters who aren’t voting for Goldberg in Goldberg-committed Republican counties like Ocean and Atlantic. Pezzullo owns the lines in vote-rich Monmouth and populous Union County and, in addition to going on the radio, is working his tail off by all accounts. He’s also made grassroots headway around the state by aggressively recruiting volunteers and initiating voter contacts, but without polling, it’s hard to know whether he’s making a dent. He’s impressed me quite a bit but, again, ground game alone won’t win November. He’ll need to find a way to leverage his communication abilities into donations.

Jeff Bell, for his part is trying to make his dent with mail, having skipped the convention season altogether. He’s in a category all by himself since the primary purpose of his campaign is raising the issue profile of the Gold Standard. Quixotic? Perhaps, but at least he believes in something. Bell once had considerable name recognition before this blogger was born. Will a combination of targeted mail and some radio spots be enough, hypothetically, to elevate him to #2 across the board in key counties and squeak out a win? Unlikely, but wouldn’t that be something?

My analysis hasn’t changed fundamentally for weeks now. The fact that our buddy Art is telling people to write in Joe Kyrillos tells you all that you need to know about how badly the powers-that-be have screwed up this year’s opportunity to deny Cory Booker a lifetime Senate job. Still, I don’t blame the candidates. They’re trying, and I’ll proudly press the button for one of them on Tuesday. You should, too.

17 thoughts on “#NJSen Hopefuls Fight to the Finish”