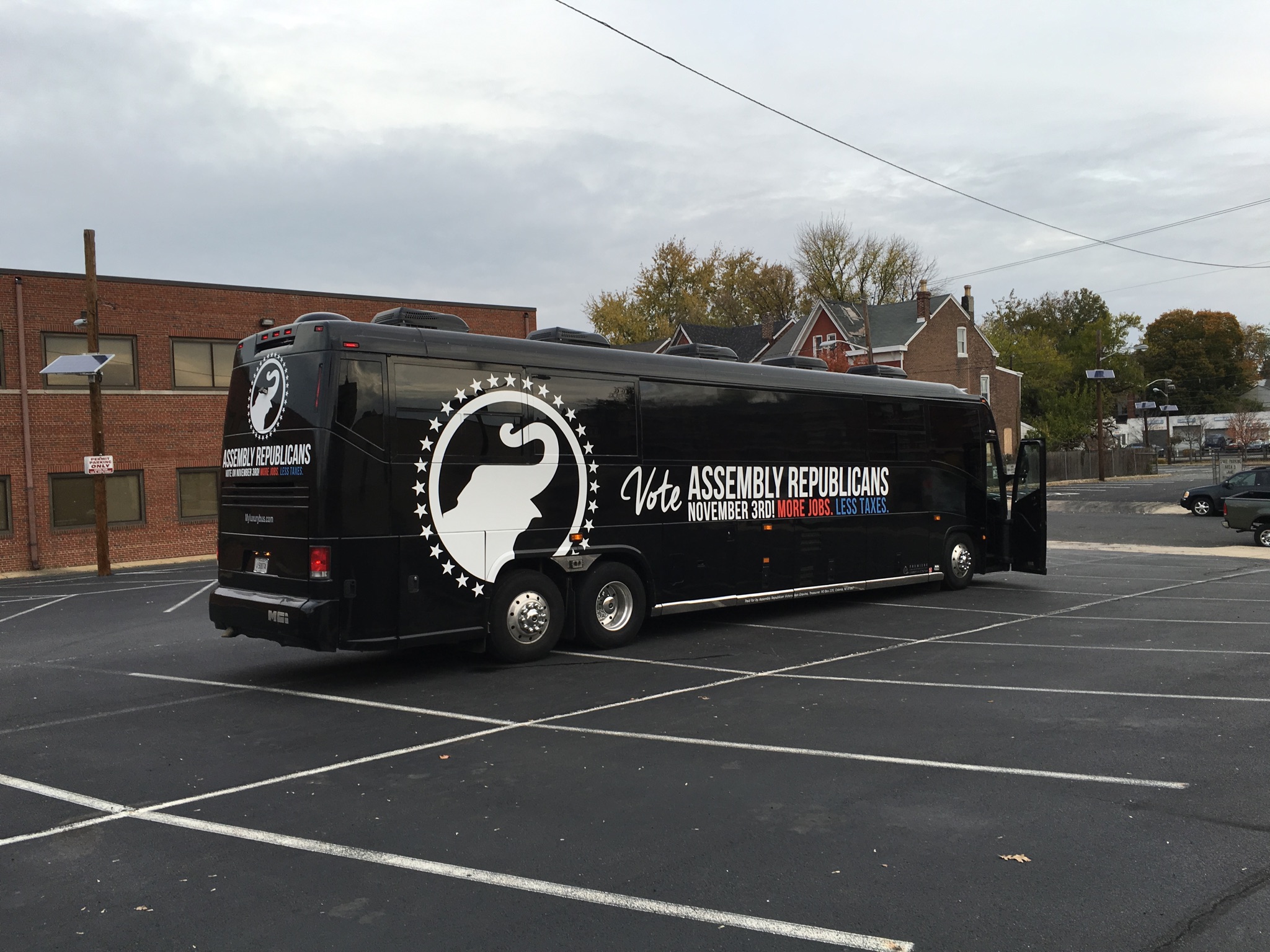 Bored of presidential coverage? Fear not, fellow political junkies: there are tons of races to watch on this bright and unseasonably warm first Tuesday in November notwithstanding this cycle’s lack of a major marquee statewide battle. You just need to know where to look…

I can’t list’em all. There are school board battles, municipal fights, intra-party jockeying and assorted other mayhem in each and every region of the state. But here’s where your Blogger-in-Chief will be particularly focused on Tuesday evening once the county clerks start posting data:

LD1: Will Fiocchi hang on?

Nowhere is the spending disparity between Republicans and the Democrat/Union/Super PAC more apparent than in New Jersey’s First Legislative District where this cycle’s most vulnerable incumbent, Sam Fiocchi (R), and his running mate Jim Sauro, a Cumberland freeholder, are fighting for their lives against invisible lightweights Assemblyman Bob Andrzejczak and political rookie Bruce Land. Polling shows a close contest with the Republicans narrowly trailing inside the margin of error; Fiocchi narrowly got by a scandal-plagued Nelson Albano in 2013 to become the cycle’s only GOP pick up. At stake this year? If Fiocchi hangs on, then we’re unlikely to see any changes in the Assembly’s partisan composition on Tuesday night, and the General Majority PAC will have spent millions of dollars with nothing to show for it (which would be hilariously delicious). If he doesn’t, State Senator Jeff Van Drew (D) is much more likely to challenge Rep. Frank LoBiondo in 2016, while a surprise GOP sweep would doom him. A Fiocchi blowout defeat early in the evening could be a sign of potential trouble for Assembly candidates in LD11 and LD2.

LD2: Who’s got the better hand in the Boardwalk Empire?

Casino gaming is the name of the game in the Second Legislative District where the Republicans, Assemblyman Chris Brown and Atlantic County Freeholder Will Pauls, are locked in a high-stakes shoot with the Democrats, Assemblyman Vince Mazzeo and Atlantic County Freeholder Colin Bell. Democrat independent expenditures are have been no less intense here (Republicans have been outspent 5-to-1 on television), but the bad guys’ bet to confuse the North Jersey casino expansion issue were frustrated, in part, by Mazzeo’s ineptitude on TV, radio, the debate stages. Polling here is close, too, with Mazzeo and Brown in first and second respectively. What’s more, the GOP (which generally dominates Atlantic-centric election despite a voter registration deficit) is mounting a strong GOTV. If both incumbents prevail, it’s entirely likely we could see them vie head-to-head in 2017 for the right to replace an aging Democrat State Senator Jim Whelan.

Jesse Kurtz tried in 2011 and came very close (losing to incumbent Tim Mancuso 678-703) only one cycle before Don Guardian became the Boardwalk Empire’s first GOP mayor in… awhile. All despite a 10-to-1 citywide Democrat registration advantage. Now Jesse’s back and Mancuso isn’t running again. Don’t be surprised to see Kurtz prevail on his second roll of the dice.

See Matt Gilson’s Bergen County-specific race watch list here especially if you want more local flavor (Fair Lawn, North Arlington, etc.). My two cents? For those of us on the outside looking in, Save Jerseyans, this race is as much about the future of Republicanism in New Jersey’s most populous county as the actual result (no offense whatsoever intended to the spirited Republican slate). A big win is great news for GOP chairman Bob Yudin and the taxpayers, as well as GOP candidates looking to run statewide in 2017. A Democrat sweep seems certain to plunge the BCRO back into another potentially chaotic chairman’s battle. God help us. The consensus speculation for Tuesday? John Mitchell (R) and Steve Tanelli (D) split the vote. The contest for a one-year term between Tom Sullivan and Daisy Ortiz-Berger is too-close-to-call.

Burlington County Freeholder: Aimee Belgard’s back on the ballot.

One year after losing the CD3 race to Tom MacArthur, Burlington County Freeholder Aimee Belgard and her incumbent running mate Joanne Schwartz are up for reelection in 2015 and facing a strong challenge from Kate Gibbs, a former GOP operative and current labor leader (yes, you read that correctly) and her running mate, the Navy SEAL-turned-attorney Ryan Peters. At stake? A clean Republican sweep this year would give the Republican organization an enviable 5-0 control of the freeholder board heading into the 2016 cycle when MacArthur – and more freeholder seats – are back on the ballot in an arguably less-favorable turnout environment.

This “blue” town could go red this year after the hard-charging Republican slate of Abraham “Abe” Lopez and Maureen Smith-Hartman quite literally caused the local Democrat establishment to lose its shit. We’ve written a ton about it; you can start here to catch up. Bottom line? If the GOP can win here, then it’s likely to be a good day county-wide. And I don’t think it’s a stretch.

Again, please see Matt Gilson’s Bergen County-specific race watch list here. We’ve talked this one to death in the wake of GOP candidate Anthony Cappola‘s public implosion. Suffice it to say, as Matthew has said many, many times, the fact that this race is still on the watch list is a testament to the district’s unusually competitive composition.

LD38 certainly isn’t the only place where ticket issues have hampered the GOP. Brick gave Mitt Romney a generous 13-point margin of victory in 2012, but the local political scene has been in continual upheaval for much of the last decade punctuated by former Mayor Joseph C. Scarpelli resigning in 2006 during a federal corruption probe and Brick Mayor Stephen C. Acropolis deciding not to seek reelection in 2013 after Superstorm Sandy. This year, facing a Democrat dominated council, Ocean County GOP juggernaut George Gilmore is spending big money to avenge Democrat Mayor John Ducey‘s 62% victory over Joseph Sangiovanni in 2013 by taking control of council with the Pannucci, Ebert, Conti and Bacon ticket, but things got complicated AGAIN when former Brick Township Councilman Dan Toth was forced to drop from the original ticket after he was charged with aggravated criminal sexual contact pursuant (N.J.S.A. 2C:14-3) and endangering the welfare of a child (N.J.S.A. 2C: 24-4a) in August. An added element of intrigue? Gilmore has brought in former Christie political guru Bill Stepien, who lost his job at the beginning of the Bridgegate scandal, to help push the numbers. Those who know say the race is too-close-to-call.

For whatever it’s worth to you, I haven’t spoken to one Republican prognosticator who thinks veteran Assemblywomen Mary Pat Angelini and Caroline Casagrande are in serious trouble on Tuesday, Save Jerseyans, but with Democrats dumping hundreds of thousands of dollars on their heads in recent days with particularly ugly attacks, one can’t help but wonder what their polling is showing. Are they trying to expand the map now that LD38 has deteriorated? Or are they simply trying to move the needle and experiment since they’ve got money to burn and have reached the point of over-saturation in LD1 and LD2? We’ll find out soon enough.

The Fourteen Legislative District hasn’t been targeted this year (the resulting fight having spilled over into the media) but as one of the state’s largest towns under GOP control and the most populous town in the district, represented by three Democrat legislators and a GOP Congressman, Kelly Yaede‘s ticket got a visit from the LG this week. The margin here is worth noting.

LD38 didn’t pan out as anyone planned in 2015 (see above) but Mayor John Cosgrove and his “Cosgrove Team” could win big today in one of Bergen’s larger municipalities and Cosgrove could be cemented as the favorite GOP option to take on State Senator Bob Gordon in 2017.

Democratic Mayor Jon Hornik‘s shot at a third term is being challenged by Ira Goldberg and the hard-charging “Positively Marlboro” ticket. 57% of the Monmouth County town’s registered voters are unaffiliated, and there are some indications that Hornik’s Democrat coalition is buckling, so don’t be shocked to see an upset here that would send shockwaves around the state as the long-time incumbent Hornik is sometimes mentioned as a long-shot contender for higher office. 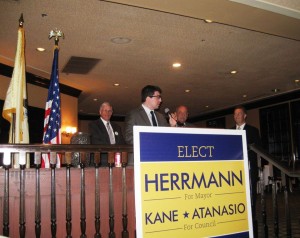 28-year incumbent Mayor Richard Pucci isn’t on the ballot this year. Republicans are now working overtime to take advantage of the vacuum in this sizable suburban community loaded with senior communities and new developments. Martin Herrmann, a 20-year veteran of the financial industry, is the party’s mayoral candidate; Harold Kane, a Navy veteran, and Joseph Atanasio, a retired NYSE Floor Governor, will stand for two council at large seats.

A long-time project of my good friend, GOP Municipal chair and former candidate Sean DiSomma, Red Bank is a tricky town owing to its unique demographics and history of voting Democrat in local elections notwithstanding the county’s red tint. This cycle, Democrat County Chairman Vin Gopal told our buddy Art Gallagher of MoreMonouthMusings that he expects to lose here this year. For once, we think Vin is right. The Dem ticket sustained a huge blow when Council President Al Murphy stepped down after being caught on tape lobbing F-bombs at constituents. 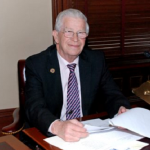 Drama is nothing new here. Notable for the reported nastiness of the race (trashed lawn signs etc.), this year’s contest features Republican Mayor Owen Henry aiming to fend off Democrat Bill Cerra. Side note: two Democrats who are township police officers were allegedly subjected to internal affairs investigations this cycle stemming from their political activities. There’s drama within the GOP ranks, too. During the primary, you may recall how Middlesex GOP Chairman Sam Thompson overrode his screening committee and replaced Council President Debbie Walker on “the line” with Councilman-at-large Brian Cahill. The move angered many Middlesex committee members, and ultimately former Old Bridge Republican Party Chair Anita Greenberg (1,154) and Cahill (834) prevailed on Tuesday but Walker (865) also slipped by as well producing an awkward situation.

Yes, here’s another Middlesex community, which isn’t surprising since this county emerged as a major statewide battleground in recent gubernatorial cycles. Christie carried it in ’09 and ’13 but county government remains solidly Democratic. Still, the Republican Party has had success locally including in Sayreville where GOP Mayor Kennedy O’Brien and current Democrat Council President Dave McGill are fighting over the big chair in a town Barack Obama carried with 58.8% of the vote. This cycle’s hottest charge? Pension padding. Buckle up.